I use a floss holder.  The brand name is FlossAid.  It enables me to floss with one hand.  It's a big time saver.

Floss teeth.  Rinse the holder.  Save it for another day.  Keep using the same floss until it becomes frayed.  Then restring.

Recession. not the economic kind

Here's a lower tooth or first bicuspid with a cracked silver filling. Notice the divot at the gumline.  That's from years of brushing too hard.  Gums recede or disappear because of injury from brushing too hard When the gums disappear, the bone underneath disappears as well.  We're in the tooth business but without bone, there will no longer be a tooth.  Once the gum recedes,  continuous hard brushing with toothpaste cuts into the tooth.

The after picture shows the white filling I did to repair the broken filling and the divot.

The helpful tip:  Don't brush hard.  Use a soft toothbrush.  Brush in circles.  Use a smear of toothpaste. Don't brush longer than 2 minutes twice a day.  Some people think, "if I brush harder then I won't have to floss."  Wrong, the brush bristles still won't reach in between the teeth.    Just floss or better yet, use a floss holder. 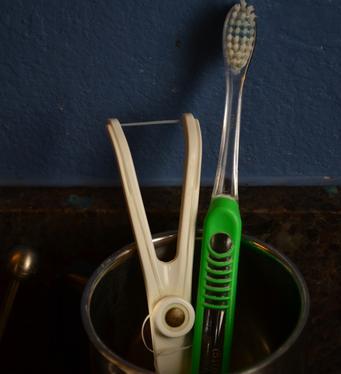