Pretty Teeth for a Pretty Woman.  Here is a gratifying  case that makes you feel  good about being a dentist.  The before and after pictures shows a big difference.  Our rule is if it shows up in your pictures then consider cosmetic dentistry.  Many little defects do not.  These flaws were dramatic:  pointy fangs on a young woman.   Even my colleagues at the implant study club were impressed.

Emax porcelain veneers from  tooth #7 to #11.  #6  is actually a baby tooth and veneered with composite resin.  She’ll need an implant later. 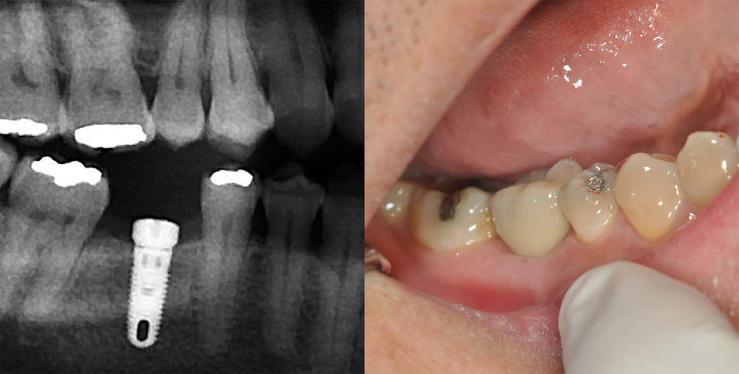 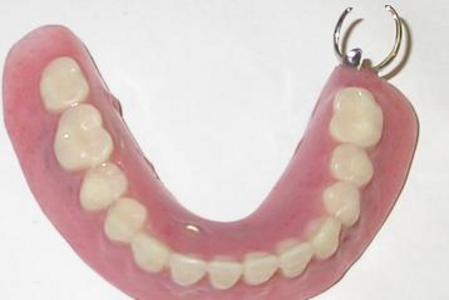 The implant is placed. The post operative pain is usually gone in a day. We wait 4 to 6 months for the bone to heal and mature.  The image on the left is an x-ray of the implant and a healing collar or a small temporary cap that is screwed on top of the implant. Once fully healed, then a titanium abutment is screwed in and a porcelain crown is cemented on the abutment (right image).   Implant placement and restoration by Dr. Gerald Au

This panoramic x-ray show all the teeth as well as  4 impacted wisdom teeth.  No sensation.  No pain.

This partial has a clasp to one last surviving tooth.  In the past, this would not be a workable solution and the tooth would be removed.  Imagine a tray of heavy plates and the strain of holding it with one hand.  Two hands are the minimum, necessary, to hold the tray.  Four would be better.   It’s the same with partials and teeth. Four teeth, spread out like legs on a chair are necessary to hold the denture.   In this case, we do implant surgery and place three implants around the arch.

The Golden Gate Bridge uses 2 strong towers to hold the roadway in between.  In the same way,  a dental bridge uses teeth to hold replacement teeth in between.  The example provided is a lower front porcelain bridge with 2 anchor teeth holding 4 replacements.  Because of increased stress,  bridges in the back of the mouth are limited to 1 or 2 replacements.  Bridges last a long time if kept free of plaque. This is easy to do in the front, not so in the back.  The bridge is 1 piece made to look like many teeth so you can not floss in the conventional way.    An alternative solution would be implants, or an implant supported bridge or a partial denture.

This is a partial denture.  One appliance restores many teeth.  There is a metal framework supporting pink plastic and plastic denture teeth.  The partial is removed at night to allow the tissue to rest.  You clean the partial in your hands with soap, water and a denture brush.

I was shocked to see a grey area associated with the impacted wisdom teeth on the right.  A cyst in the bone called a Keratocyst had eaten half of the jaw.  The red outline shows the extent of the cyst.  This was a broken jaw waiting to happen.

Fortunately, there is a happy ending.  Kaiser oral surgeons and plastic surgeons in the operating room were able to remove the tooth and cyst without nerve damage.  Biopsy confirmed the cyst was not cancerous.  The patient recovered completely.

The before picture shows a lot of tooth but looks are deceiving.  What you see is plastic filling material not solid tooth.  The silver dot is a steel post used for reinforcement.  From a structural integrity standpoint, the long term survival of the tooth is poor because of the risk of cracking.

The only solution is removal of the tooth.

The tooth is removed and bone is grafted to maintain the width of bone.  The bone I use is Puros from Zimmer Biomet Dental, the most popular bone used in America.  Puros is human bone donated from a cadaver, cleaned and processed for surgery.  It has an outstanding safety record;  not one report of disease transmission.

The gold tips protruding out of the gums are Locators.  The implant is underneath the gums like a root.  The Locator is the second stage on top of the implant.  The locators snap into the red and blue circles found underneath the partial denture, locking it into place, much like the metal snaps on a ski jacket.  Now the patient requires two hands to remove the partial. At case completion, the patient went from being a dental cripple to having a functional mouth.  No more teeth falling out at the restaurant.

We request that patients have x-rays taken on a regular basis.  X-rays catch problems which can not be seen: cavities in between the teeth,  gum disease, broken teeth and impacted teeth.  The FDA recommends bitewing or checkup x-rays every 2 to 3 years depending on dental history.

Occasionally, xrays tells us much more about the patient. 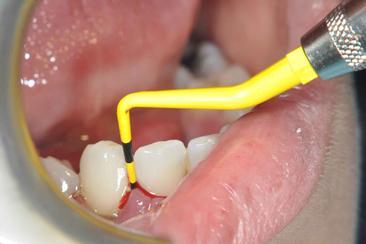 On the x-ray, looking at the lower left first molar, tooth #30, the white lines in the center of the roots is a root canal filling.   In this case, the root canal has failed. Below the roots, there is a dark area which represents a chronic abscess full of bacteria.   To the right is white oval.  That is a ball bearing that is used to calibrate the x-ray so that we can digitally measure  height. 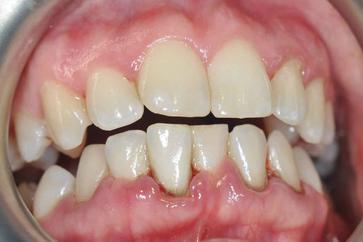 When you come in to clean your teeth, we scrape off the hard deposits called tartar.  Tartar is covered with plaque which are full of bacteria.  The bacteria multiply and irritate the gums.  The gums become red and start to bleed.  If the irritation persists then the bone around the teeth dissolves away.  If too much bone dissolves away, then the teeth become loose and fall out.

Teeth roots are covered with bone and gums.  Between the gums and teeth is a space called the pocket.  We measure the depth of the pocket with a probe and record the finding in millimeters.  3 mm is normal.  6 mm is gum surgery.  9 mm means the tooth is lost.  The picture on the left show the probe going down 5 mm.  It bleeds to touch which is a sign of inflammation.

The picture on the right shows dark brown lines at the gumline of the lower teeth.  These are bands of tartar.  The gums are swollen, irregular in shape and bleed with touch.  Some bone has been lost permanently. This is moderate gum disease, stage 2. There are 3 stages of gum disease, 1 through 3, 3 being the worse with a signficant chance of losing multiple teeth.

The treatment plan prescribed is cleanings every 4 months.